As I sit here laboring over the glorious chore of untangling our monthly financial home budget, I realize Christmas is getting near.  Wifey and I always do our best attempting to create the perfect Christmas morning for our six little girls.

We scour the internet for gift ideas and reach to the back of our brains in an endless effort to find something our girls will appreciate and find useful without breaking the bank.  This year, as a family, we have declared to only give gifts we can make with our hands so that they come from the heart and not some nameless catalog.

With Wifey's mastery of homemade bread, I'm sure that will be the centerpiece of many gift baskets to extended family.  Her self-taught sewing skills have grown by leaps and bounds and undoubtedly will contribute numerous items to the gift giving.  Personally, I have become quite good at making jerky from hamburger and will most likely contribute in that respect...at least, if I don't eat it all first.

To skip to the point of my post, I'd like to ask my readers (if I have any left after my short hiatus during October) what is the best gift you can remember getting from YOUR father?  Particularly, I'm interested in hearing what you female readers remember getting from your fathers OR what you Dads have been proud to give your little girls.  Raised as an only child (most) of my young life, I can't say I was exposed much to giving gifts to young women.  Since I have six, I could use some ideas. Thanks in advance.

So, what was the best gift your Daddy ever gave you?

Thanks to help from a co-worker, we were able to do twice the work in half the time tonight.  I should be caught up for at least an hour. Thought I'd put some proverbial pen to the paper real quick.

Our family vacation to Disneyland the first week of October was near perfect.  Wifey and I had put so much into planning that I'm not sure if we could've had MORE fun than we did.  She has packing down to a science and I worked tons of overtime to ensure we had the cash for everything we wanted to do and see.

It did rain pretty heavily one day on the trip.  We stuck it out (in the park) until a little after noon time.  At that point, our feet were soggy and our toddlers' hands were cold.  We shuffled back to the rental house and enjoyed our evening inside.

I'm begrudgingly back in the groove at work.  Still cross-training on MRI scanning but enjoying the change in scenery.  It is amazing what science can do these days in the field of medicine.  I've been at work almost every day since we've been back from vacation, whether it be for a few hours or an entire 12 hour shift.  I tried to take my first "sick day" of the year and stay home to help the family with some stuff.  Wifey was sick and kids had science projects and church treks to pack for.  Sure enough, one hour into my "night off" and I was called in to work.  My replacement for the night shift doesn't know Ultrasound scanning so, by default, I was still on call even after calling in sick.  So, I went to work for about two hours and quickly scampered back home.

The weekend we returned from Disneyland, I learned of a horrible DUI crash that claimed the life of my friend's 11 year old son.  My friend was on-call one Friday night for our Nuclear Medicine department and was called to the hospital around 2am.  His wife was out of town so he took his 11 & 7 year old sons with him on this ride.  A drunk driver, attempting to ditch the police whom were chasing him, ran a red light and t-boned my friend.  His 11 year old died at the hospital that night from blunt head trauma.  His 7 year old had a pelvic fracture and splenic laceration but will survive. My friend was also released with no major injuries (physical anyway.)

This bothered me for a few days and I had a hard time with the tragedy.  As a father of six, I have no idea how I would deal with the loss of one of my children.  As a result, I appreciated my time with them each day just that much more.

My friend currently on the Biggest Loser show is hanging in there.  I believe he's in the final three now.  I've only received a few text messages from him since his homecoming.  I enjoy watching the episodes as they air on Hulu every Wednesday morning.  Kinda funny how they are ignoring John when he's clearly the one with the biggest potential to win the show. He had almost zero camera time on the first episode yet he lost a whopping 37 pounds in the first week.  Guess he didn't provide enough drama?

Gotta run.  As soon as I typed "down time" some work popped up for me.  The ER is getting busier at nights now. I can tell the winter is approaching soon.  Once the "snow birds" get here from back east, I'll be wishing I was back on vacation again.  Hell... I already do. 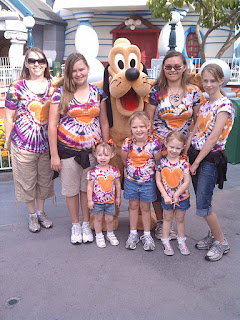 Wifey made tie-dye mickey shirts for the whole clan.
6 comments: