Our church had an activity day right up my alley: Father/Daughter Fishing Day! It was a nice Friday afternoon and as soon as I got off work, I sped home and picked up Boo for some fun and relaxation at our local fishing pond.

I had just picked up a couple of closed-face reels (and rods) right before Boo got sick. I found several packages of fishing lures on Amazon at a great price:

Add in some assorted weights, hooks and swivels and we were ready to go! We picked up our favorite bottles of Sarsparilla Rootbeer and headed to the pond. There were several other folks there fishing so our chances of catches anything dwindled.

Boo got to play with some worms and learned quickly how to pull moss off of her hooks. We had practiced for several days in the front yard on how to cast effectively. She practiced three nights in a row. I have much better luck with closed-face reels than open-face reels. The backlash is reduced to near nothing with a closed reel.

We took a break and cooked hamburgers and hotdogs with some friends. Add in some Doritos and a cold drink and all was right in the universe. At the end of the day, we didn't catch any fish...but neither did anyone else at the pond.

We still had a terrific time and I most certainly enjoyed my time with Boo. Watching her suffer the last three weeks in and out of the hospital makes me appreciate the good times all the more. We can't wait to go again and maybe...just maybe...catch some fish next time!

After a ruptured appendix and two return trips to the Emergency Room with Boo, I think we finally have her on the right track to wellness. The last visit netted us stronger pain medication to help her through the rough spots of this HSP (Henoch-Schonlein Purpura.)

So today we decided to whittle a couple of little birds and add them to a bird house that she had already build at a Home Depot workshop for kids. She has never whittled before and I took great pleasure in teaching her the basics.

Boo got to learn some basics on my Corner Cat Finish Sander by Ryobi. So we can mark whittling AND sanding off our learning list. Hooray! To start her on her "knife classes" as she calls them, I found a YouTube video that explained all the parts of the knife and went over them with her until she could name every part. We covered knife care and safety. Next we'll cover "proper sharpening", as WranglerStar would call it.

First, we started by finding a basic starter whittling project on YouTube. One of my favorite woodworkers on YT is Steve Ramsey and he has a large array of DIY woodworking projects on his channel Woodworking for Mere Mortals. The project we settled on was titled "Whittling a Bird out of a Creative Block."

We found a couple of blocks of random 2x4s in the front yard and drew out a template of a bird. We whittled down the wood as close to the drawing as possible. She was excited to use her new pocket knife I bought her from Amazon. It is hunter orange with pink inlay and has a recessed image of an elk head in the handle. It stays on my night stand and comes out to play for special occasions.


After whittling down to size and sanding it smooth, she took to painting the bird with a pretty blue color. I drilled small holes in the belly and used two small nails for legs. I gently pounded them into the body and clipped off the heads of the nails so that the opposite end will fit into holes on the bird house.

We made two birds and the whole project took us about three hours. It was a terrific way to spend a Saturday afternoon and Boo is enjoying showing them to everyone. This was a fun little craft project for anyone looking for something to do on a lazy summer day. 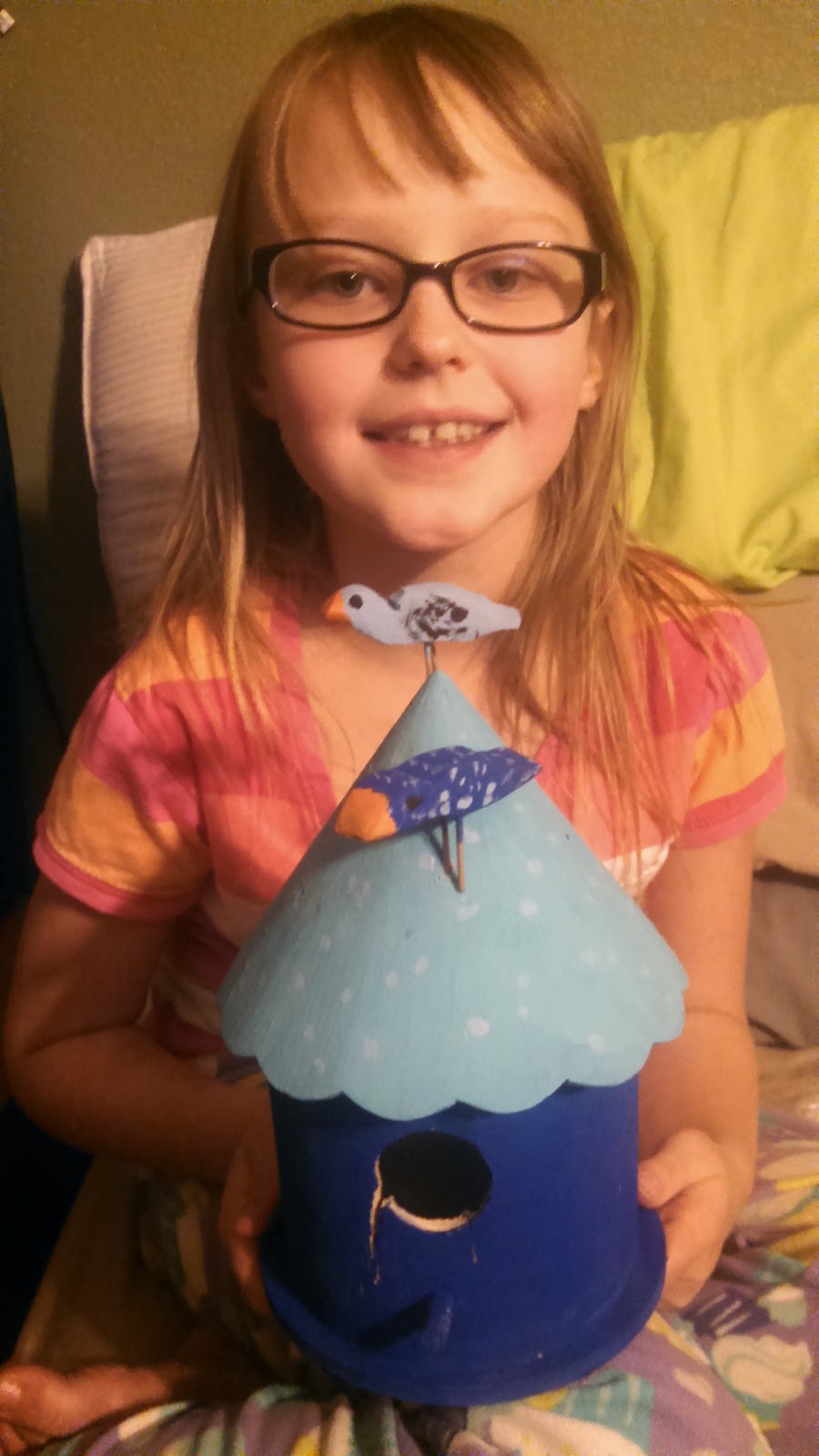 Now, let's hope we can get back to having fun on a routine basis and get passed all this horse-hockey nonsense we've been going through for the last 14 months!

Another round of severe abdominal pain has sent Boo back to the ER.  Luckily (finally),  we were sent home with something stronger than Tylenol.  This time we got Tylenol with Codeine.
She's been home 24 hours and everything is fine so far. The prescription is only good for 4 days so we'll see if we need a refill or not next week.
3 comments:

Readmitted to Hospital with HSP

After ten days in the hospital,  we were finally discharged.  All the signs and symptoms of the ruptured appendix are gone except for the three little incisions on her belly.  But family time at home would only last for two days.

Boo woke up this morning with severe abdominal pain and her right eyelid extremely swollen.  Her abdominal pain seemed worse than ever before.  Unbelievably the pediatrician's office was open for business.  After a quick phone call,  we hurried Boo to the office.

The majority of clinicians are now in agreement that Boo now suffers from HSP (Henoch-Schonlein Purpura.) WebMD has a spot-on definition for what Boo has but I can't link to it for you as I am attempting to post this from my cell phone.  This is a reaction in her body that leads to skin rash,  joint pain and severe abdominal cramping.  In very rare cases,  it can include unilateral eyelid swelling.  Medicine can't say exactly what triggers the onset but they agree there is no cure.  It plays out over 4-6 weeks and will eventually resolve on it's own.

Until then,  it's all about pain management.  For now,  she's readmitted to the exact same room we had for ten days on the pediatric unit and rotating Morphine and Toradol.  She received Morphine in the ER (Pediatrician wanted to direct admit to hospital,  I negotiated stopping through ER for quicker pain relief. )

But in an attempt to stay off the harder drugs,  we're trying Toradol every 6 hours first.  The Morphine worked fast (through IV)  but only worked for about 75 minutes before she was shaking in pain.  The Toradol (intravenous) worked just as fast and seems to be lasting much longer.  She's started to whimper now (in her sleep)  and we're at the five hour mark. Time for her next dose of Toradol. I'm also told that the Toradol has an anti-inflammatory effect which will help too.

We're told we should only be here for 24 hours as long as she stays compliant with eating,  drinking and walking. She becomes non-compliant with extreme pain (and I don't blame her.)

Her feet still hurt when she walks to the bathroom but we'll see what tomorrow brings. It's almost 11pm and she dozing off again.

From Ruptured Appendix to Marshmallow Feet

Boo got admitted to the pediatric unit around midnight Sunday (last Sunday)  under the misdiagnosis of urinary tract infection (UTI.)

It was at THAT point (day three) that a physician decided it MIGHT not be a UTI.  A quick CT Scan revealed her burst appendix and huge abscess behind her uterus.

Two hours later she was prepped for emergency surgery.  It was a 45 minute procedure and Wifey and I sat together in a waiting room assuring each other that everything would be okay.

She emerged groggy from surgery and we were told how well the surgery went... "a success."  Fast forward a few days...

For almost a week Boo hadn't eaten without throwing up.  It didn't take long before she didn't want to eat or drink at all.   It was the second night after surgery that she requested a hamburger! As delighted as we were,  she was still restricted to "clear liquids."  It would be the next day that she would get to eat a few bites of sausage and bacon.  The next day came... and she was granted her hamburger.

Walking had been difficult and just getting her out of bed was a chore.  But as the days progressed,  so did she.  She began eating and drinking like normal and walking great distances. With her pain subsiding,  her compliance to eat,  drink and walk increased.

Day six came and we had the best day since we got admitted.  Wifey and I rotated staying the night at the hospital and I spent 4 vacation days to make sure she had someone by her side at all times.

Then it happened.  At 3pm on that sixth day,  Boo said her feet itched and she took off her hospital socks.  There they sat,  at the end if the bed,  glowing beet red,  swollen like marshmallows with a rash everywhere.

I quickly helped her into the shower hoping she could wash off some invisible cooties that had swollen her feet so terribly.  They quickly became painful and the skin tight as a drum.

Her nurse was summoned and she put calamine lotion all over them.  This made them burn worse! It quickly,  and painfully,  was wiped off.  The physicians think she has now had a severe reaction to her antibiotics... a DELAYED reaction because she had been on them for several days already.

So here she sits,  unwilling to eat,  drink or walk because her feet hurt so bad. It's like we're back to square one.  But at least I know her appendix is removed and blood tests show her infection is gone.  Now we just have to ride out her rash... which has now spread to several parts of her body.

Wifey is here to relieve me to go home.  Boo is sleeping peacefully.  I'll post pics when I get home.